Are Students' School Records Safe in the Cloud? | Care2 Causes 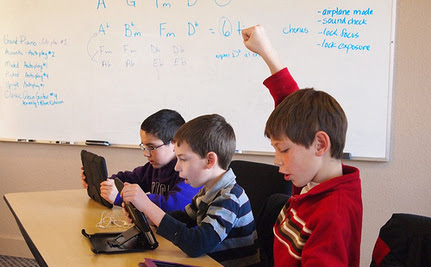 Are Students' School Records Safe in the Cloud? | Care2 Causes:


Would you want your child’s school records to be stored online in the cloud? These days, technology is an integral part of the school experience. From e-textbooks to internet research, most students do some of their schoolwork online every day. And soon, students (and their parents) may be able to access their school records from cloud-based services. But what are the benefits and risks that come with storing data in the cloud?

... Technology has played an important role in Connecticut schools for decades now, and up-to-date computer system infrastructures will be a necessity for the state's school districts beginning in 2014-2015, when state-wide testing of the Common Core State Curriculum is fully implemented.
While CMT and CAPT tests worked with old-fashioned pencil and paper, the 2014-2015 common core tests will use computer adaptive testing almost exclusively to more accurately assess how well students understand the material, according to the Smarter Balanced Assessment Consortium website. As students take the tests, the exams will adjust the difficulty level depending on how well students are answering the questions. "The State Department of Education is currently undertaking a modeling exercise to analyze districts' technology capacity and needs related to the Smarter Balanced assessments, including what…
Enviar um comentário
Ler mais

When computers run the classroom: The challenge of teaching in a technology-driven world - The Western Front: Education: education, teaching, internet, online classes,

When computers run the classroom: The challenge of teaching in a technology-driven world - The Western Front: Education: education, teaching, internet, online classes,:


It’s no secret that technology is changing education. Much of learning is done through the Internet; students blog, comment and take classes fully online. Western Washington University has online-only courses and degree programs. Case in point? You’re reading this online right now. It serves to reason, then, that teachers have to take the next step by learning how to teach in a technology-driven world. This isn’t easy, particularly for those who didn’t grow up in the Facebook generation.
Enviar um comentário
Ler mais

Just 3,420 A-Level students take up computing during 2011/12; Only 376 in London
The low take-up of computing in UK schools is hurting growth in UK tech industries, a new report from Next Gen Skills has claimed.
The report highlighted statistics from the Department of Education that showed just 3,420 A-Level students had taken up computing during 2011/2012, down from a high of 12,529 in 1998.
Of those who entered, only 376 students enrolled in computing A-levels in London.
Six central London boroughs such as Westminster, Camden, Islington, Hackney, Tower Hamlets and Southwark meanwhile only had 33 A-level students in computing, despite being identified by the Greater London Authority as having the highest concentration of tech in Europe.
In response to the statistics, industry luminary and Next Gen Skills co-chair Ian Livingstone said that English schools were “failing to produce students in enough number…
Enviar um comentário
Ler mais 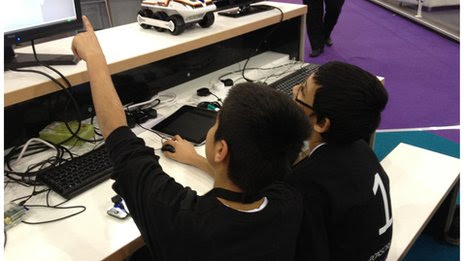 BBC News - Coding in class - teachers told to take a back seat:

Shreenand, 13, has made an animation of a girl jumping up and down, by stringing together lines of computer code. "These are the co-ordinates of where the girl is at. I can make her move around to another part of the screen when I press the flag icon," he says. He has been learning how to code since he arrived at Lampton school in Hounslow, west London, a year ago. "My teacher thought I was pretty good, so she set me a target of making a game a month in my spare time," he says. "I look for a game I like to play and then make it myself. I like to know how the game actually works. Me and my partner Jonathan are pretty good in my class. We aren't that experienced yet but we want to write our own code when we know how."
Enviar um comentário
Ler mais
Mais mensagens